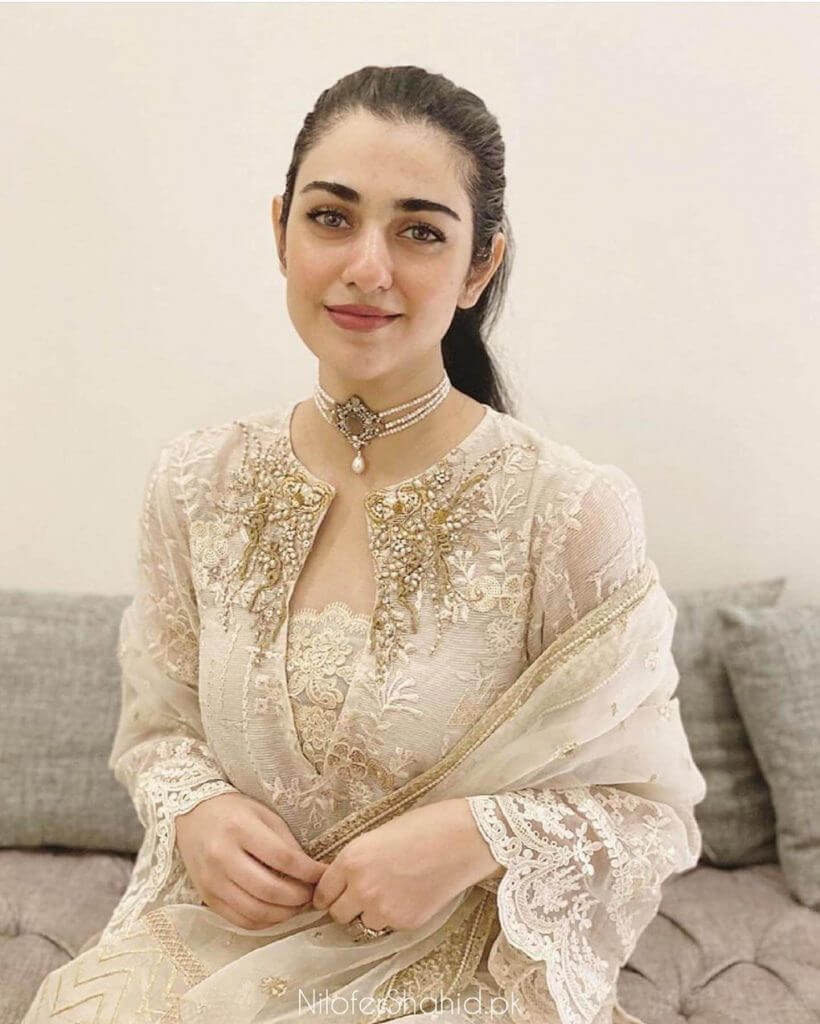 Sarah’s husband is Falak Shabir.  Falak Shabir is a famous singer as well. Falak proposed to Sarah on her birthday. Sarah and Falak are blessed with a baby girl. In most of the interviews, Sarah khan has talked about her courteous family. Her parents were courteous with them and didn’t show anger to them at all. Sarah Khan is also known for her kindness and polite behavior. Sarah and Falak got married in 2020. On October 8, 2021, Falak Shabir announced the birth of their daughter. She has done a lot of dramas. Sarah Khan is a well-known Pakistani drama actress.

She’s known for her best drama “Sabbat” as well. Due to her role as Miral in Sabbat, she has become the leading actress in the entertainment industry of Pakistan.  Her upcoming drama serial is “Wabal” which is airing on HUM TV. Sarah is not just a celebrity star but also a social media star.  Sarah Khan is also known as the queen of social media. Sarah has social media profiles, including Instagram, Facebook, and Twitter. On Sarah’s Instagram profile, she has 7.9 million followers. Sarah’s Facebook likes are almost a half million. Here is the complete Sarah Khan biography so have a look on it.

Sarah is a female actress, and she started her career in 2012 in the serial “Mere Aqaa.”  Sarah is the most emerging celebrity in the Pakistani drama industry. She had a relationship with Agha Ali. But then, due to some of their personal issues. Now Agha Ali is also married to TV actress a Hina Altaf. Sarah is now married to Falak Shabir, a song writer, and singer. Their wedding grabbed the whole internet on fire. They had her first child in 2021. After their marriage, Sarah’s father died suddenly. She did many dramas, and all of them were excellent. Sarah shoots a song with Falak, her husband. The song was released on their first wedding anniversary. They named their daughter Alyana Falak. Falak gives roses to her wife and her daughter as well. They organized a party (Aqeeqa) on their daughter’s birth.

As the best actress, Sarah is rewarded with many acknowledgments and prizes.  She has received many awards in her career. She is keen on her industry.

She has the most emerging star in the entertainment industry of Pakistani dramas. She is a model and does collaborations through her social media profiles.

“At least from the perspective, fame has no drawbacks. In my area, I see everything that is worthwhile. Yes, because the media frequently misunderstands, sensationalizes, and spins my behavior. Just that thing irritates me from time to time”.

Moreover, Sarah seems to have a perfect yet traditional personality that is enough to pique the audience’s interest. Sarah Khan is regarded as one of the industry’s best excellent and varied talents.